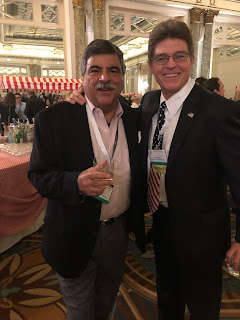 John F. DeBartolo is a Founding member and Vice President of Atkinson & DeBartolo, PC in Red Bank. From the founding of the firm with Bunce Atkinson in 1980, he has devoted his career to the practice of Family Law and to the service of the organized Bar.

He is a Past Chair of the Family Law Section of the New Jersey State Bar Association and Past President of the Monmouth Bar Association and has been a member of both Associations for over 30 years. He served six years as the Monmouth County Trustee to the New Jersey State Bar Association. In 2011 the New Jersey State Bar Association awarded him the Saul Tischler Award in recognition of his contributions to practice of family law.
Mr. DeBartolo was born in New Brunswick, raised in Milltown, NJ, and graduated New Brunswick High School. He received his Bachelor of Arts degree from Boston University College of Liberal Arts and his Juris Doctor degree from Boston University School of Law. After graduation from law school, he clerked for the Honorable Neil G. Duffy, Sr., JSC, in the Chancery Division, Matrimonial, Essex County.
During his career Mr. DeBartolo has represented husbands, wives, mothers, fathers, and grandparents. He has also been appointed by the Court as a guardian ad litem to represent the interests of children. He is an accomplished litigator having tried contested cases in the Superior Court and in arbitration proceedings. He has always focused on helping his clients achieve an equitable and affordable resolution to their family law issues. Mr. DeBartolo has considerable experience in the Appellate Division of the New Jersey Superior Court, having briefed and argued several reported decisions. In 2003 he argued on behalf of the New Jersey State Bar Association as amicus curiae (friend of the Court) in the case of Weishaus v. Weishaus, 180 NJ 131.
For more than 25 years he has served as an Early Settlement Panelist and Blue Ribbon Panelist in Monmouth County. In recent years Mr. DeBartolo has been called upon by his colleagues and appointed by the courts to act as mediator and arbitrator of complex family law cases. Throughout his career he has maintained a key interest in providing continuing legal education to the lawyers of this State. He served as the State Bar’s first representative on the New Jersey Supreme Court Board on Mandatory Continuing Legal Education. Mr. DeBartolo has lectured at continuing legal education seminars for the New Jersey Institute of Continuing Legal Education, New Jersey Association for Justice, and the Haydn Proctor Inns of Court, as well as for the Administrative Office of the Courts Orientation Seminar for new and rotated Judges. He served four terms on the New Jersey Supreme Court Family Division Practice Committee. He has also served as member of the District IX Ethics Committee.
Kenneth Vercammen, Esq.– Probate, Estate Planning & Elder Law
Kenneth Vercammen is an attorney in Edison, NJ. He is Chair of the ABA Probate & Estate Planning Law Committee of the American Bar Association Solo Small Firm Division.  He is the author of the ABA book “Wills and Estate Administration”
He is a speaker for the NJ State Bar Association at the annual Nuts & Bolts of Elder Law & Estate Administration program.  He is admitted to the Supreme Court of the United States.
He was Editor of the ABA Estate Planning Probate Committee Newsletter. Mr. Vercammen has published over 150 legal articles in national and New Jersey publications on Wills, litigation, estates, probate law and trial topics.
He is a highly regarded lecturer on litigation and probate law for the American Bar Association, NJ ICLE, NJ State Bar Association and Middlesex County Bar Association. His articles have been published in noted publications included New Jersey Law Journal, ABA Law Practice Management Magazine, and New Jersey Lawyer. He established the NJlaws website www.njlaws.comwhich includes many articles on Estate Planning, Probate and Wills.
KENNETH VERCAMMEN & ASSOCIATES, PC
ATTORNEY AT LAW
2053 Woodbridge Ave.
Edison, NJ 08817
(Phone) 732-572-0500
(Fax)   732-572-0030
www.njlaws.com
www.njwillsprobatelaw.com
The book Wills and Estate Administration” is available at
http://shop.americanbar.org/eBus/Store/ProductDetails.aspx?productId=224827061

Posted by Vercammen Law at 4:13 PM