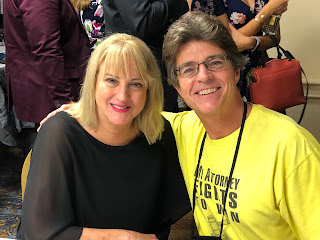 Melanie’s legal career began as a Briefing Attorney for the 14th Court of Appeals in Houston, Texas where she researched and helped draft published legal opinions.   She tagged along with the judges to political events and functions and by the time her year was up, she hung out her shingle and made the courthouse her home.  In those early years she did criminal court appointments while learning the ropes in the other Houston courts.  The judges appointed her to determine the best interest of children, the elderly, and the mentally incapacited.
Born on July 16 in Dallas, Texas to a salesman and homemaker, Melanie Bragg was a natural writer.  Her mother instilled in her a love for book and movies and her father instilled a belief that she could do anything she wanted to do in life.  At seven she wrote “The Story of My Life” on her mother’s manual typewriter, in red ink of course.  It was only half a page, but it was a start.  You never saw her without a book and her diary.
She graduated from high school a year early, went to junior college, then took a semester off to go to Europe.  Melanie landed in Paris, France and began a jewelry business that at first thrived, then fizzled due to France’s famed silver laws and other legal entanglements.  She was back in the States and set her sights on international studies at the University of Texas at Austin, where she graduated with honors.  She went to law school in Houston and became involved in bar association activities on the local, state, and national levels.  She became the first woman president of the Houston Young Lawyers Association and was a director of the ABA Young Lawyers Division.  In addition to the leadership, public service, and career development these activities brought, there was a lot of long-term relationship building, traveling, and dancing involved in her young lawyer years.  This tradition carries on to this day with her activities in the ABA YLD Fellows board and the Annual Fellows dinner dance-her young lawyer friends are now fellows and they are still the first ones out one the dance floor each year!
In 1993, Melanie formed a company called Legal Insight, Inc. and wrote and performed in ten legal education programs for the University of Texas Health Science Center, all of which were broadcast on their closed-circuit television network.  Two of the programs caught the eye of national distributors and they have been distributing Melanie’s legal education programs to hospitals, universities, and healthcare organizations nationwide since.  Her titles are Charting Medical Record’s: Do’s & Don’ts to Avoid Liability; HIPAA Legal Liability Issues; HIPAA: Privacy & Security In Depth; Informed Consent Legal Liability Issues; Emergency Care Legal Liability Issues; and What You Should Know About Living Wills. Educating the public and professionals about best practices is a favorite part of Melanie’s law career.
The idea for Crosstown Park came one day when she was driving back to Houston from a seminar in New Orleans.  She kept seeing an African-American man hitchhiking in a business suit and tie.  The urge to pick him up was strong enough to make her begin asking questions-what if he was a widowed, retired teacher who was on his way to Houston to help some homeless children?  What if they teamed up to help those children?  She got home, went straight to her pen and paper and began the story that is now Crosstown Park.
They say when the student is ready, the teacher appears.  Melanie met the late, great Rita Gallagher, the co-founder of Romance Writers of America, who became her writing teacher, her mentor, and her good friend.  Melanie continued to develop her craft and became involved in the American Bar Association Solo, Small Firm & General Practice Division Book Publications Board.  Her first published chapter was included in How to Capture and Keep Clients titled Effortless Marketing: Putting Your Unique Qualities to Work, published in 2005.  It is the basis for many of her motivational talks to a variety of groups.  Her first ABA book was published in 2009, HIPAA for the General Practitioner.
When she’s not writing, Melanie devotes her time to her work with the ABA Solo, Small Firm & General Practice Division, mentoring young lawyers, and other charitable causes.  On Friday afternoons, you can see her at the local movie theatre catching a new movie.  If you look real hard you will see a big smile on her face.http://melaniebragg.com/bio/
Kenneth Vercammen, Esq.– Probate, Estate Planning & Elder Law
Kenneth Vercammen is an attorney in Edison, NJ. He is Chair of the ABA Probate & Estate Planning Law Committee of the American Bar Association Solo Small Firm Division.  He is the author of the ABA book “Wills and Estate Administration”
He is a speaker for the NJ State Bar Association at the annual Nuts & Bolts of Elder Law & Estate Administration program.  He is admitted to the Supreme Court of the United States.
He was Editor of the ABA Estate Planning Probate Committee Newsletter. Mr. Vercammen has published over 150 legal articles in national and New Jersey publications on Wills, litigation, estates, probate law and trial topics.
He is a highly regarded lecturer on litigation and probate law for the American Bar Association, NJ ICLE, NJ State Bar Association and Middlesex County Bar Association. His articles have been published in noted publications included New Jersey Law Journal, ABA Law Practice Management Magazine, and New Jersey Lawyer. He established the NJlaws website www.njlaws.comwhich includes many articles on Estate Planning, Probate and Wills.
KENNETH VERCAMMEN & ASSOCIATES, PC
ATTORNEY AT LAW
2053 Woodbridge Ave.
Edison, NJ 08817
(Phone) 732-572-0500
(Fax)   732-572-0030
www.njlaws.com
www.njwillsprobatelaw.com
The book Wills and Estate Administration” is available at
http://shop.americanbar.org/eBus/Store/ProductDetails.aspx?productId=224827061

Posted by Vercammen Law at 3:16 PM